The Revo OEM+ Air Intake System for the Ford Fiesta ST is a high performance upgrade that utilises the stock air box, offering gains in both power and torque.
Erfahre mehr
Artikel hinzugefügt

The Revo OEM+ Air Intake System for the Ford Fiesta ST is a high performance upgrade that utilises the stock air box, offering gains in both power and torque.

Initial flow testing of the OEM system highlighted the restriction and turbulence caused by the pipe joining the turbo to the airbox. The route varies in diameter and convolutions in the pipe slow airflow to the turbo, choking the engine. The OEM airbox performed far better than expected when used in conjunction with the Revo enhancements.

The Revo system is the only kit currently available that replaces the rear plastic back-pipe with a one-piece 70mm aluminium pipe. Automotive grade silicone couplers connect the system to the stock airbox and a Revo 3 stage foam panel filter replaces the restrictive paper filter. The Revo OEM+ Air Intake system was found to be less restrictive than the stock system during testing and continued to flow air long after the stock system maxes out. Flow bench testing saw a significant reduction in restriction over the stock system. The OEM system reached its maximum potential of 300 Cubic Feet per Minute(CFM) with a restriction of 759.3 mmWg, the Revo system was able to flow up to 350 CFM with a mmWg restriction of only 761. At the same 300 CFM point there is a difference of 151 mmWg between the stock and Revo OEM+ intake. This difference allows the engine to still make power at the top of the rev limit when installed with the Revo kit. The following documents are available to view: 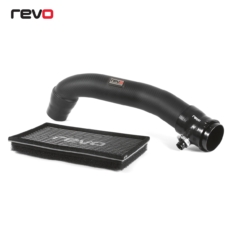 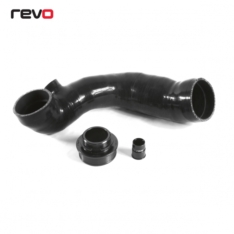